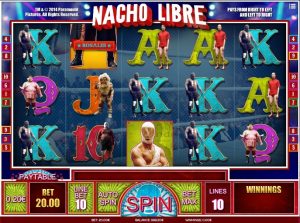 The Nacho Libre slot is a popular online video slot game powered by iSoftBet. The game is based on the 2006 Mexican wrestling film Nacho Libre starring Jack Black. The game features images and sound clips from the film with the exception of Jack Black himself presumably due to restrictions on image rights. The backdrop to the game is a view of the wrestling ring with one very large wrestler taking on a very small and skinny amateur. Instead of background music, the game uses the sound of a live crowed cheering on the wrestlers with bursts of music when a winning combination is achieved.

The Nacho Libre slot game is played over five reels with three rows and a total of 10 paylines. Before each spin, players can set the coin value from 0.1 coins up to 0.3 coins per line. The game also gives players the ability to set the number of paylines played from 1 line up to 10. This take the maximum bet up to 30 coins per spin. In addition, the game also features a handy skill-stop feature which allows players to spin and stop the reels at any time. This makes the game quicker and gives players more control.

The Nacho Libre slot game includes a number of bonus features in the form of a Wild symbol and a free spins round where players can choose their own bonus Wild. On the reels, the game has five main symbols that appear stacked on each reel. These are the five main wrestlers in the game. The highest paying symbol/wrestler is Ramses paying out 3000 coins for all five across the reels. After Ramses, Sage is next in line followed by Rosales, Dynasty and finally Esqueleto. The lower paying symbols include the classic 10 to ace card symbols with mini wrestlers standing next to each symbol.

The Wild symbol in the Nacho Libre slot is the wrestling bell. This symbol can be used to replace any of the other non-bonus symbols on order to form a winning combination on an active online pokies NZ payline. During the free spins round, the Wild symbol plays an even more important role. The Scatter symbol in this game is the Nacho Libre game logo. Finding all five of these anywhere on the reels is one way to win the slot jackpot of 15 000 coins on a max bet. The second way to trigger the jackpot is to land all five wrestlers in full stacks across the reels.

Choose Your Own Free Spins Bonus

The Scatter symbol in the Nacho Libre slot is also the key to triggering the free spins bonus round. To trigger the free spins round, players must land 3 or more Scatter symbols anywhere on the reels. Once triggered, players can choose from two types of free spin bonus games. The first is 15 free spins with a Wild symbol that takes up an entire reel. The second bonus game that players can choose includes 15 free spins with a standard wild symbol but all wins are come with a 3x multiplier.