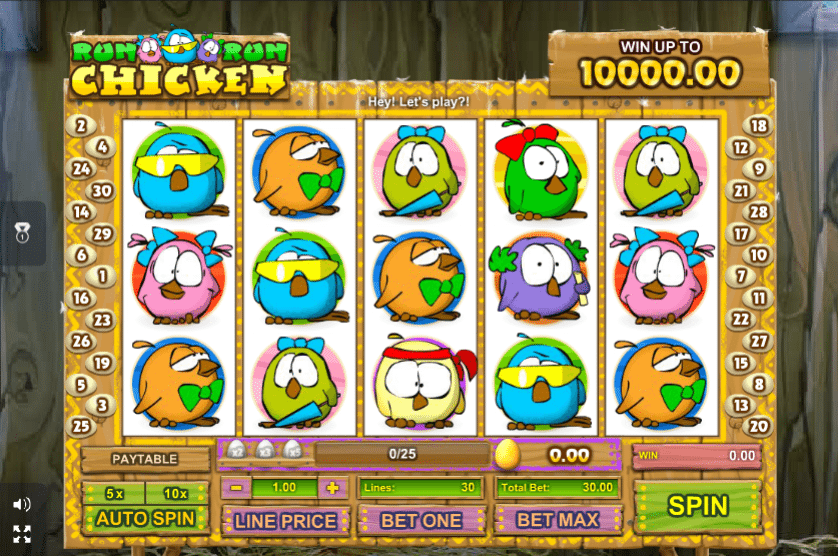 Run Chicken Run slots NZ was developed by Games OS and is themed around a hen and her baby chicks and the golden eggs she lays. The symbols are cartoon like and feature multi coloured chicks. A hen house is the background setting for this online slot game and the sound effects are appropriate for the theme.

How to Play Run Chicken Run

Run Chicken Run slot has up to thirty selectable pay lines that are activated by clicking on the bet one icon. This places the one coin bet on the respective pay line. Choosing the bet value is done with the plus and minus buttons on the line price icon. The bet values are set at amounts from 0.05 to 5.00 for each pay line. The bet max icon activates all thirty pay lines instantly.

Click on the spin button to manually spin the reels but for faster game play and consecutive spins the auto play feature can be activated and adjusted for personal preferences. All of the relevant control icons are situated underneath the five by three row grid.

Special Run Chicken Run slot symbols include the mother hen, a basket of eggs and a golden egg. These symbols do not pay out on their own. The regular symbols consists of eight baby chicks of various colours. Matching symbols appearing three to five times on activated pay lines pay out according to the pay table. Each pay line with multiple wins will only award the highest valued symbol combination.

Run Chicken Run slot has a wild symbol and two special symbols that are part of the bonus features. A basket full of eggs is the wild symbol which helps make up winning combinations by substituting missing symbols. It will only substitute regular symbols and not the two bonus symbols.

The mother hen is the bonus symbol. If she lands on an active pay line three to five times she will trigger the guess who bonus game feature. There will five guesses as to whether the mother hen will hatch a boy egg or a girl egg. Bonus points will be given for correct guesses and at the end of the feature the bonus points will be tallied and multiplied by the pay line bet.

Another special symbol on the Run Chicken Run slot reels is the golden egg. These form part of the Eggpot feature. A small portion of each spins bet is placed into the Eggpot. Every golden egg symbol that land on the reels is then collected and once a total of twenty five golden eggs are collected the Eggpot is awarded.