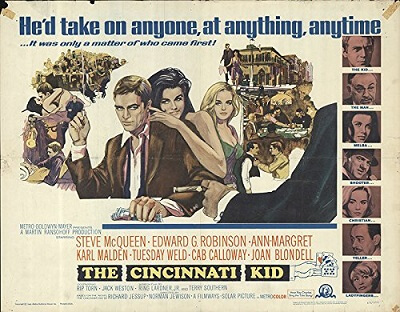 The Cincinnati Kid is based on a 1963 novel by Richard Jessup. It was adapted for screen by Terry Southern and Ring Lardner. This adaptation was Lardner’s first work for a major studio since he was involved in the infamous Hollywood Ten trial, where American citizens were incarcerated for supposed communist ties or sympathies.

The film, starring Steve McQueen and Edward G Robinson was widely considered to be the director, Norman Jewison’s transition to more serious cinema after his previous light comedies films. The film was originally released by Metro-Goldwyn-Mayer in 1965, with the future home releases handled by Warner Brothers.

The Actors In The Cincinnati Kid

Steve McQueen plays Eric Stoner an up and coming poker player in New Orleans. He is out to prove that he is the best poker player around and hears about a character named Lancey Howard, played by Edward G Robinson. Robinson was already well known for his character acting at this point and he would go on to star in the Sci-Fi classic Soylent Green and the biblical epic The Ten Commandments. Stoner and Howard already had a rivalry going in the film by this point; Stoner previously lost a huge sum of money against Howard in a five card stud game.

Howard plays real money bingo game against a wealthy player, William Jefferson Slade, played by a young Rip Torn. Slade loses $90 000n by today’s money to Howard and he plans to get revenge. He arranges a game between Stoner and Howard, but he tries to influence Stoner’s friend, Shooter, who has an immaculate reputation as a fair and honest poker dealer. Through Slade’s blackmail, Shooter reluctantly agrees to help Slade with letting Stoner win in order to humiliate Howard.

During the big game Stoner realizes Shooter is trying to turn the game in his favor and he convinces Shooter to let him win the game on his own, setting the scene for the final showdown between Stoner and Howard to determine who the best is.

Interesting Facts About The Cincinnati Kid

In the film, the game is played according to open stake betting. This is an unusual role nowadays but it was a very popular form of wagering in home games and certain casinos of the time. Interestingly, Stoner’s friend shooter who serves as the dealer in the game, clearly states that string bets are not allowed, but the players make many string bets during the game.

The final hand in the film has also attracted a lot of attention with both players and movie buffs alike. The odds of Stoner’s full house losing to Howard’s Straight Flush are 45 000 000 to 1, but of course these astronomical odds ratchets up the tension for the final scene.

The Film Reception And Legacy

By the time Cincinnati Kid was released, it was inevitable that it would be compared to The Hustler, another classic poker film that was released at the same time. The Cincinnati Kid does however hold its own against the film with the always watchable Steve McQueen in the lead role and Edward G Robinson’s menacing Slade who you as a viewer always root against.