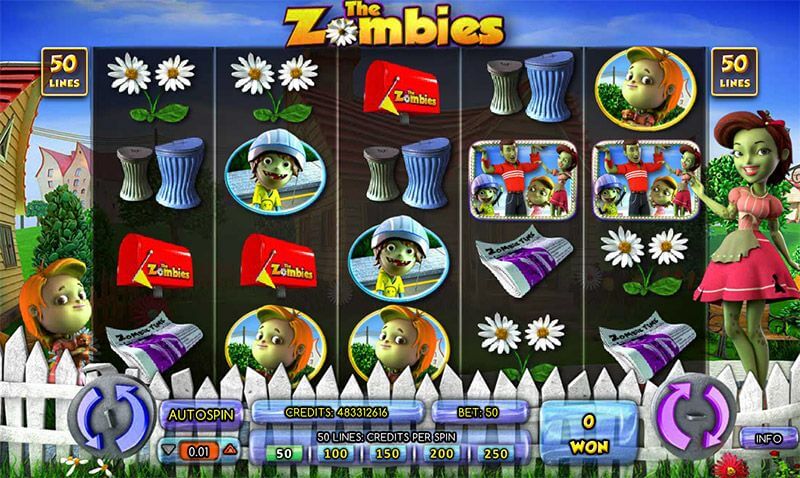 This is quite a fun twist on the norm from Amaya Games slot developers’ and it’s called The Zombies. As the name suggests the theme of this slot is in fact the living, breathing dead that the term has been associated with but in this particular instance it seems that there is a different scenario in mind concerning them. On the reels, as well as alongside the screen as part of the backdrop and even throughout the bonus features these undead are portrayed living the normal, suburban lives, alongside family members, neighbours and the usual day to day activities of a modern day lifestyle, only without a pulse. It is done in a fun and light hearted way on the screen.

The gameplay of this slot is perhaps the most interesting side about it though and all starts with its set of 5 reels. There are 4 rows of symbols on these reels and the game is played with 50 fixed pay lines. Where The Zombies online slot begins to get interesting is when the spinning is concerned and players discover they can choose to types of gameplay, the power game and the easy game, each with their own advantages, symbols and even direction of combination forming. This Amaya Games slot also has a few other features and bonuses to sink ones teeth into, so to speak.

The Zombies Suburban Lifestyle on the Reels

Bringing together the two different worlds that The Zombies pokies online game does on the reels is a rather bizarre experience and one that might just take a certain degree of getting used to. That being said it is quite hard to hate the fun smiles of the undead children, the flirtatious look of the young mother brain eater and the overall family camaraderie that this group of people, however different, can still so clearly enjoy, perhaps a lesson for us all to learn here on the reels. Otherwise the graphics and backdrop to the game make it quite a vivid and entertaining experience while ideally trying to take advantage of the bonus features waiting in the wings.

Due to the unique two different spins feature that has its own unique symbols for each game, it can get a little hard to track all of what’s involved. A few of the similar ones include The Zombies mailbox, newspapers, trash cans and flowers, with one half parading as good and healthy, the other half dramatically less so.

Undead Bonuses and Features in Store

The first feature to mention is the dual play option which offers players a choice of power or easy game. The former consists of more impressive wins but a smaller frequency while the reverse applies to the latter. This effectively juggles the volatility of The Zombies online slot game on a whim. There is also a dance party bonus that is triggered through the Zombie party bonus symbols and awards 10 free spins. Additionally there are more of these bonuses available during the feature so a higher chance to retrigger more spins.

The final bonus feature of The Zombies slot from Amaya Games is the bonus game is triggered by landing a parent and a bad Zombie symbol on adjacent reels. Players then pick their weapons and kill a few of the worse, more recognisable, Zombies for prizes and multipliers.